I wonder whether there is a way to create a common plugins language fallback for plugins where no translation for that particular version of a language does exist.

Example for the problem:

I think that would be a kanboard thing and not a plugin thing but I cant confirm.

I dont know if this helps or works… 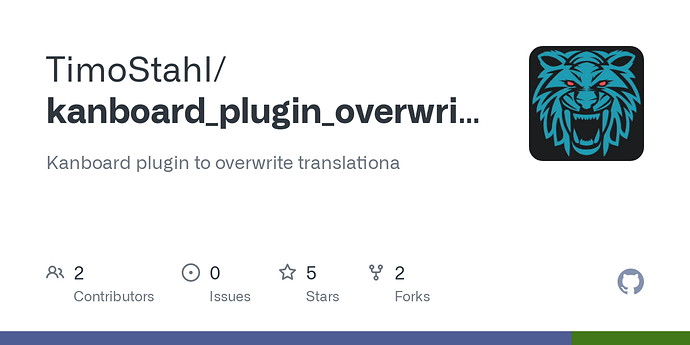 Kanboard plugin to overwrite translationa. Contribute to TimoStahl/kanboard_plugin_overwrite_translation development by creating an account on GitHub.

I also thought about that Plugin. But to be honest – I don’t understand what it does.

May beI will try later.

This plugin is working fine. Within the Kanboard folder you’ll find /app/Locale, with subfolders for popular languages. The file within such a sub folder is named “translations.php”. You can edit that file, add your translations to the concerning strings (between the empty quotes “”), save the file and the translations will be visible immediately.

I would propose a much more pragmatic approach …

Why not contribute a PullRequest for each of said plugins, by copying the folder in locale/de_DE to locale/de_DE_du and then just make the required changes to translate Deutsch(Sie) to Deutsch(Du) ??

I know how localization in KANBOARD works.

But I haven’t a clue how Plugin ‘Overwrite Translation’ works, what it does and how in has to be used.